Curvilinear forms seem to have captured the imagination of prolific architect Bjarke Ingels. Following last fall’s opening of his The Twist art space in Norway’s Kistefos sculpture park, a literally twisted building whose interior feels something like falling down Alice in Wonderland’s rabbit hole, the founder and principal of the international AD100 firm BIG has created a similarly spiraling structure in Switzerland. [Source: Architecturaldigest ]

Located in the small town of Le Brassus (where watchmaking is ingrained in its heritage) and nestled within the Vallée de Joux landscape, Musée Atelier Audemars Piguet is a museum, workshop, and archive for the luxury watch brand. It’s all housed within a double spiral building whose green rooftop becomes a walking path supported by a façade of curved glass walls. Rooms within its meandering interior are also separated by glass walls, allowing full view of the watchmaking. And the new museum provides a direct connection to the renovated founder’s house—a historic structure that is the birthplace of the AP watch workshop. 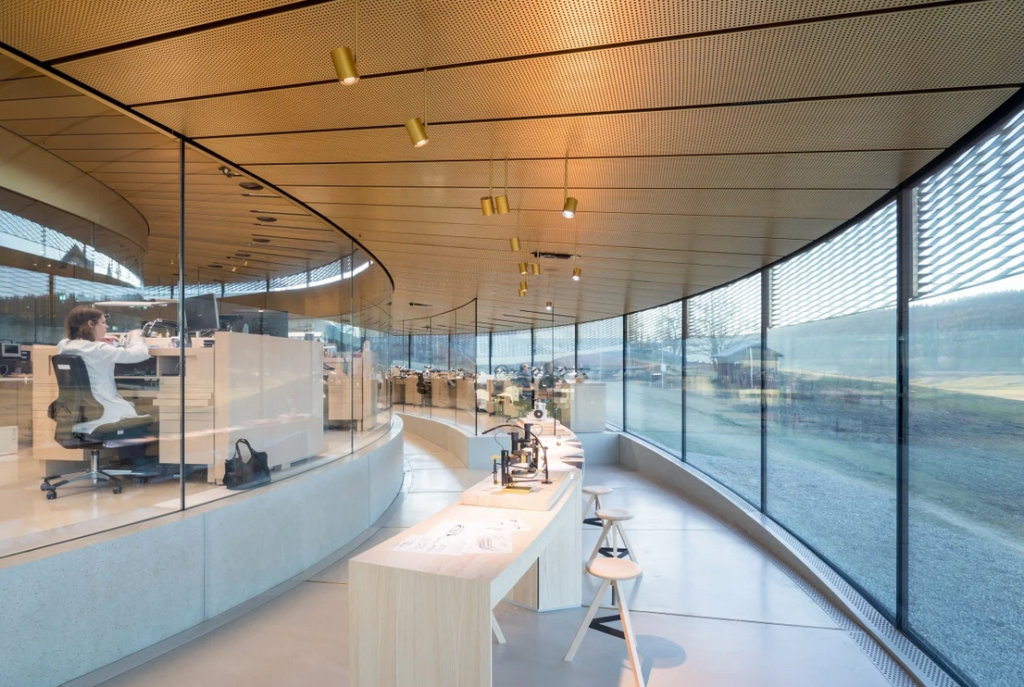 Ingels envisioned the museum-workshop’s design as a metaphorical extension of an Audemars Piguet timepiece. “You have a spiral, almost like a spring hovering above your head,” explains the architect. “It’s inspired by the element in the timepiece that stores and delivers the energy of the clock.” When it opens to the public on June 25, the 25,800-square-foot building will allow visitors to move intuitively through its concentric circles of exhibition space, introducing the science of the brand’s 145 years of watchmaking along the way. Ramping the interior to connect uneven floor plates adds a dash of whimsy to the design, and creates opportunities to ring the ceilings with clerestory windows that pull sunlight into the center of the building. A brass-and-steel honeycomb-shaped sunscreen wraps the exterior to provide shade when needed.

“In watchmaking, a lot of the disciplines are what you could call getting the maximum amount of impact with a minimum amount of material,” says Ingels. “The idea is similar to this structure, and how the glass carries the entire roof over our heads….The museum is almost like an open work. Nothing is hidden, all the elements that you see are performing and part of the narrative, gently curving concentric circles.” Audemars Piguet has been headquartered in the village of Le Brassus since it was established in 1875, and hopes that its new BIG-designed building will inspire sustainable tourism.

For the watchmaker, BIG has also designed an adjacent 75,350-square-foot (7,000-square-meter) hotel to serve timepiece-interested guests. Currently under construction, the Hôtel des Horlogers has five zigzagging slabs that create a sloped exterior path along its front façade–an allusion to the surrounding ski trails. Guest rooms are accessible from this path and via a continuous inclined interior corridor. The hotel will include a bar, conference center, and spa, and is designed to frame views of its valley.

Says Ingels: “When you are designing architecture it’s like a form of portraiture. We never design a building for ourselves—it’s always for and about someone else and something else.” [Source: Architecturaldigest ]