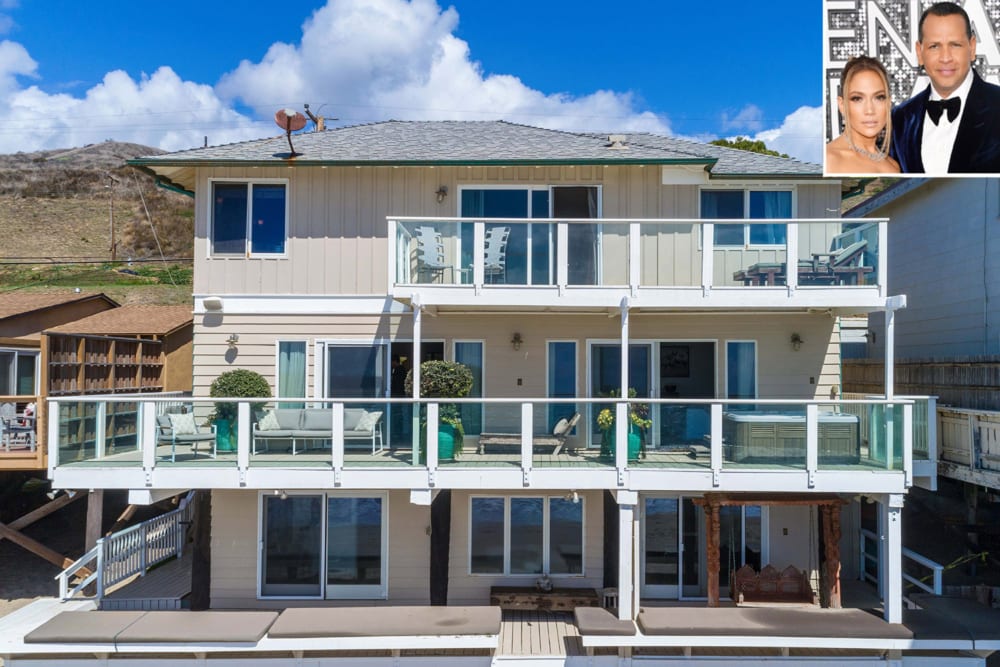 The engaged stars have put their five-bedroom, four-and-a-half bathroom oceanfront home on the market for $7.99 million, after having purchased it from Entourage actor Jeremy Piven for $6.6 million in February 2019, the Los Angeles Times reports.

Boasting over 4,400 square feet of living space over three levels, the home is located in the heart of Malibu, with over 50 feet of private beachfront. The home features walls of glass and expansive terraces on each level overlooking the Pacific Ocean. [Souce: People]

In March 2019, shortly after the couple purchased the home, HGTV star Joanna Gaines visited the couple at the property and they were photographed with a film crew on the beach outside. A source confirmed to PEOPLE at the time that Gaines was considering helping Lopez, 51, and Rodriguez, 45, remodel the home. “Jennifer wanted to walk the space with Joanna in person,” a source told PEOPLE of the meeting. “They’re both extremely busy, but it’s hard to take on any kind of home project without actually seeing the space.”

The meeting was “really just an opportunity for them to walk the space together and for Joanna to hear Jennifer’s vision for the space,” the source continued.

It’s unclear whether the Gaineses did end up doing a renovation on the home, or if they just shared some advice. Any footage captured by the video crew has yet to surface, though the Gaineses are preparing to launch their own TV network. Originally slated for an October premiere, the channel’s debut has now been pushed back due to the ongoing COVID-19 pandemic. Lopez first confirmed she and Rodriguez had purchased the beach house and met with Gaines on The Ellen DeGeneres Show last year.

“We got a little fixer-upper next to the water, and we were like, ‘Oh, we gotta fix this up, it’s really a house that needs work,’” Lopez explained. “I was like, wouldn’t it be amazing to have [Gaines] do it for us? But she doesn’t do anything outside of Waco, like nothing.”

The “Medicine” singer had all but accepted she wouldn’t be receiving design help from Gaines when Rodriguez called in a special request for a meeting between the two women.

“He opens up FaceTime and it’s Joanna Gaines. And I was like, ‘Are you kidding?! Hi!’ I totally fangirled out,” she recalled. “And she was like, ‘Hi,’ just like she is on the show.”

Lopez is a self-proclaimed superfan of Joanna and her husband Chip Gaines’s show Fixer Upper, which aired its final episode in April 2018.

After Rodriguez surprised his fiance with the FaceTime call with Joanna as an anniversary present, the couples became fast friends — with Lopez and Rodriguez even visiting the Gaines family at home in Waco, Texas in April 2019 (which Chip, ever the jokester, referred to as “a Twilight zone of hot people”).

In early July, PEOPLE reported that Lopez and Rodriguez had picked up a new West Coast property — a 2,200-square-foot home featuring three bedrooms and two-and-a-half baths — in Encino, California, for $1.4 million.

With a blended family of six (Lopez has twins Emme and Max, 12, with ex Marc Anthony and Rodriguez has two daughters, Natasha, 15, and Ella, 12, from his previous marriage), it’s unlikely that the property is intended to be a family home. Instead, it’s likely the home is either a real estate investment for the business-savvy pair or possibly a place for a family member or friend. The couple also shares several properties across the country: They spent time at home social distancing during the coronavirus pandemic at their glassy, modern house in Florida. Lopez has a 14,000-square-foot, 7-bedroom house in the Hamptons that she purchased back for $18 million back in 2011, as well as a large estate in Bel Air.

They’ve said goodbye to some serious real estate in recent years, too.

Lopez let go of a major piece of real estate in 2017, listing her 6,500-square-foot penthouse in Manhattan’s Flatiron District for $27 million.

And the couple listed another NYC apartment for $17 million in 2019, less than a year after buying it. “They need more space with the kids,” a friend told PEOPLE of their three-bedroom spread in a luxury tower. “They love the building, but just need a bigger space than they originally thought.” [Souce: People]