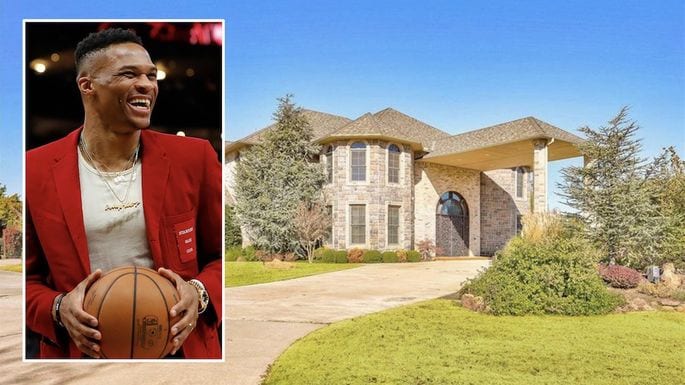 Houston Rockets superstar Russell Westbrook has been busy off the court, in the real estate arena. The All-Star is closing in on a deal to sell his Edmond, OK, mansion. Currently listed for $1.3 million, the luxury home is now in pending sale status. [Source: Realtor.com ]

Purchased in late 2012 for $2 million, the massive residence has been recently renovated, and includes a number of upgrades. Westbrook has had a bit of a battle unloading the home—even though he’s selling at a loss.

The home originally came on the market in November 2019, for $1.7 million. Since then, the price has been cut a couple of times, most recently in early July, to the current price. The recent reduction seems to have done the trick, as the home went pending shortly thereafter.

For a buyer who prefers options, this place is a gem—it features two master bedrooms on the main level. As you enter, there’s a grand foyer with a dramatic double staircase that leads upstairs.

The open floor plan flows easily from the large kitchen into a lovely dining area. The kitchen boasts two islands (a chef’s dream!), a Sub-Zero fridge/freezer, and a large walk-in pantry.

Upstairs, you’ll find a cool bonus room, complete with a kitchen and bar area, a second study room, home theater, and a large exercise area. Outside, there’s a gorgeous pool with hot tub, large cabana, and a putting green for golf enthusiasts.

The mansion is only about 14 miles from downtown Oklahoma City, and is not too far from the shopping and dining in the area.

Earlier this year, Westbrook sold his smaller starter home—also located in Edmond. He purchased the three-bedroom residence in 2008, for $383,500.

After his departure from the Oklahoma City Thunder last summer, Westbrook began shuffling his portfolio. The modest home had recently been updated, and the kitchen and bathrooms feature quartz countertops. The backyard is made for entertaining with an outdoor grill, fire pit, plus a pool with a waterfall.

His smaller Oklahoma home landed on the market last October for $429,500. After a few months on the market, the home wound up selling in mid-March, for $419,900.

According to real estate records, an LLC connected to Westbrook owns one additional Oklahoma home that was purchased in November 2017 for $1.2 million. That home has yet to land on the market.

A California native, Westbrook also owns two homes in the Los Angeles area. In 2018, he bought a posh estate in Brentwood for $19.75 million. Back in 2015, he bought a $4.6 million Beverly Hills home from the reality TV star Scott Disick.