The 12 Coolest Neighborhoods Around the World

We all know that the best way to really know a city isn’t to go to the central square or major museums, or even the most tourist-trodden neighborhoods. What’s more interesting is discovering the up-and-coming neighborhoods where local creatives are settling in and setting up shop.

It’s especially important in cities where overtourism is becoming a problem, such as Barcelona and Amsterdam. Sure, walk down La Rambla or explore the inner canal belt, but then get out into the places where local life is really happening.

I asked some of my favorite travel experts for their tips on the best neighborhoods to explore right now. Here’s what’s on their radar. [Source: Forbes ]

Earlier this year, the influential food travel and publishing company Culinary Backstreets declared 2018 the year of the neighborhood. Cofounder Ansel Mullins singles out Sants in Barcelona as one of his favorites. “Most locals know the Sants area as a place they pass through on their way to Barcelona’s main train station, but to us it represents something much deeper: a neighborhood where we can still experience the city’s original soul—culinary and otherwise,” wrote their local correspondent. “While other parts of Barcelona, especially its historic center, have had to contend with the effects of the city’s growing popularity, Sants has somehow managed to stay under the radar, allowing it to keep much of its traditional charm and way of life, while also being an inviting area for new ventures to give it a go. This is a place where you can still find old bodegas with wooden casks filled with bulk wine for sale, homey vermuterias where locals gather to chat over seafood tapas and family-run restaurants…. There’s a wonderful mix of traditional spots that have been around for generations and new restaurants and tapas bars opened up by innovative young chefs escaping high rents in the center of town.”

The Yards in Washington

“The Navy Yard area is the fastest growing neighborhood in Washington D.C., and it is slated to develop 3 million square feet for residential and office buildings, pedestrian space and retail and dining for 2030—as well as its first hotel, the Thompson,” says Melissa Biggs Bradley, the founder of Indagare. “With its waterfront location, industrial infrastructure and historic roots (it was established in 1799), the Navy Yard—or “the Yards”—has a cool factor that most other D.C. neighborhoods lack.” While the main attraction is still the Nationals’ baseball park, which hosts not only games but also popular events like a craft beer festival, the restaurant scene is gaining a strong following. Top tables include the microbrewery Blue Jacket, the upscale Italian Osteria Morini, the internationally focused Chloe and the highly inventive Ice Cream Jubilee, which offers grown-up flavors like honey lemon lavender and gin & tonic sorbet.

“Just 15 minutes by ferry from the city’s central station, Amsterdam Noord is a neighborhood on the rise, and rightfully so,” says Tom Marchant, the founder of Black Tomato. “Set amid old trams and multicolored shipping containers is NDSM, a hub for independent art galleries and lively watering holes. This provides serious visual endorphins and is an Instagrammers’ heaven.” Hotel Faralda, which has three rooms with “serious Wes Anderson vibes” suspended in a towering crane, is a quirky landmark in the NDSM community. And IJ Hallen is renowned as one of Europe’s largest and most unique flea markets.

Most tourists stay within the walls of the old city, but Biggs Bradley recommends this neighborhood just outside the walls. “It offers an authentic look at what life in the city is really like for locals,” she says. “Anchored by the Plaza Trinidad, a lively public square, Gestemani is not yet fully gentrified, and it is inhabited by families that have lived in the same house for multiple generations. Thus, there’s a very strong local culture and identity here.” Recent years have brought some stylish new additions, including cool cafes like Café del Mural, bars like Demente, tiny restaurants like Caffé Lunático, Malagana, and La Cocina de Pepina. 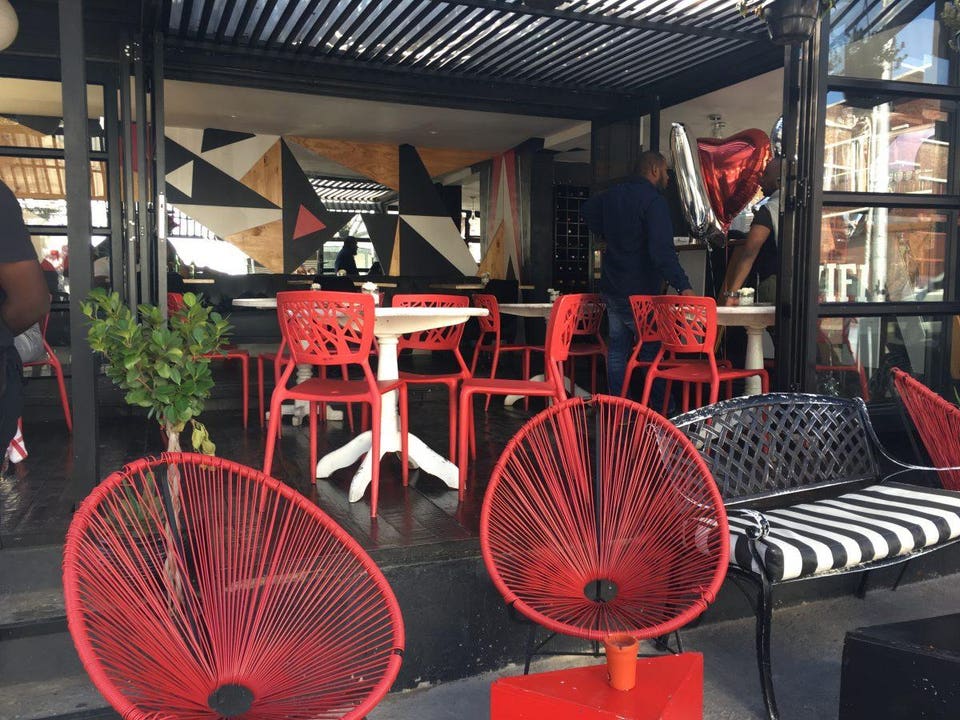 “A no-go zone until the end of Apartheid in 1994, Johannesburg’s Maboneng has since transformed into a lively urban area with blossoming art and culinary scenes,” says Biggs Bradley. The compact neighborhood is known for cultural attractions like the Museum of African Design, Arts on Main—a complex that was previously a series of dilapidated buildings and now has many cool galleries—restaurants and boutiques. The culinary offerings are widely diverse, with restaurants that specialize in everything from Ethiopian cuisine to health food. “One of the best spots for a meal is Che Argentine Grill, which offers delicious specialties like empanadas and a live tango band on weeknights.” 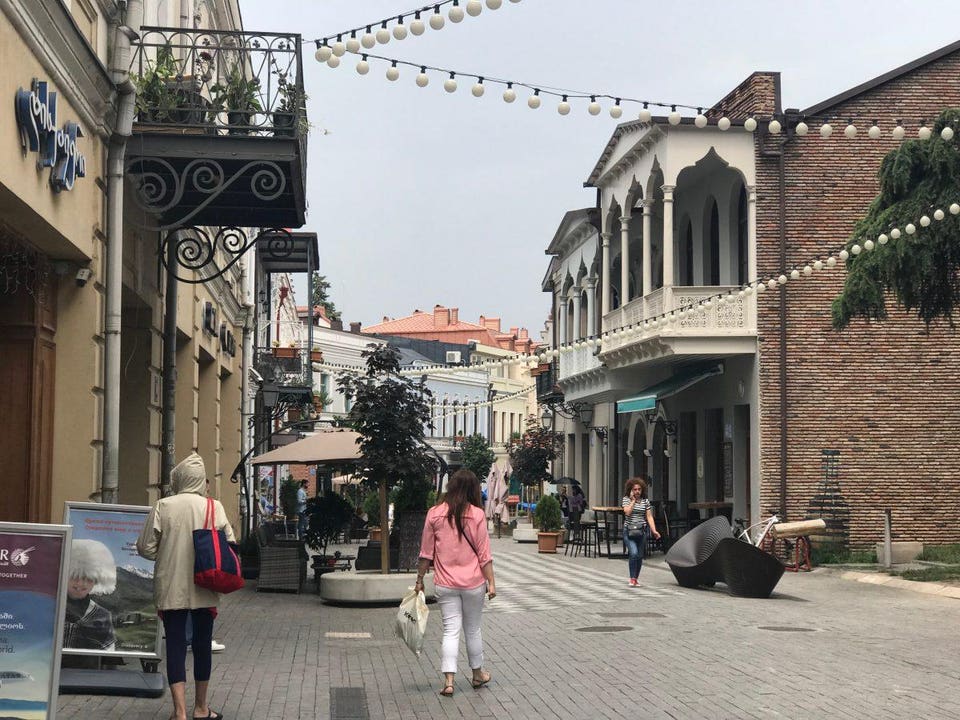 We can also call 2018 the year of Georgia. The former Soviet republic has become among the trendiest places to visit, and the capital of Tbilisi is always the first and last stop. The old town is charming, but both Mullins and Jonny Bealby of Wild Frontiers are more excited about Plekhanov. “It’s an area where native Tbilisians traditionally live, renowned for its old-style houses with beautiful doorways,” says Bealby. “It recently became more fashionable when the main avenue, Agmashenebeli, was renovated and especially when the Fabrika space opened. Once a Soviet sewing factory, this multifunctional space now houses cafes, bars, studios, shops and a hostel. This area is a mixture of young creatives and tourists, and there’s live music most evenings.” 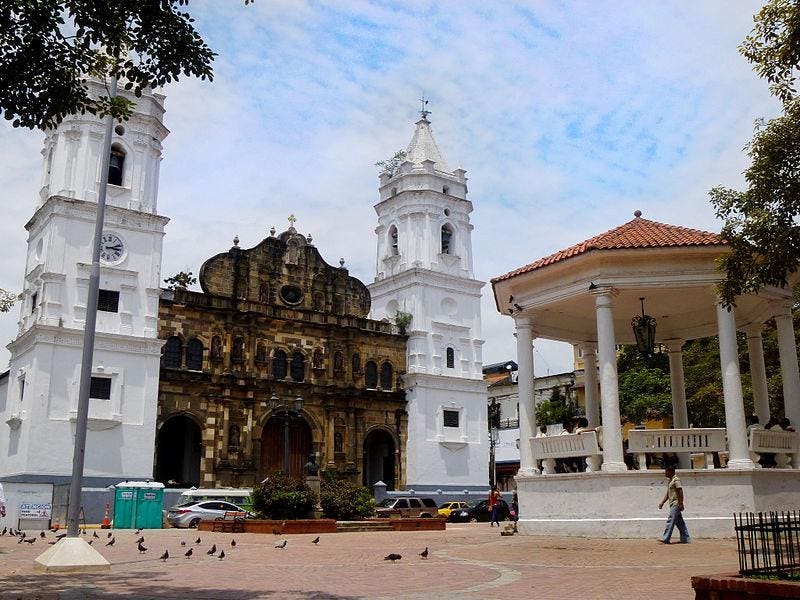 “In the 1990s, Casco Viejo was one of the city’s most dangerous neighborhoods, overrun by gangs, full of violence and turf wars,” notes Biggs Bradley. Now a staircase in the boutique American Trade Hotel has wallpaper that shows some of the original graffiti that was found in the abandoned buildings. “The fact that gritty gang slogans are today used as decoration in a designer hotel goes to show just how far Casco Viejo has come. The neighborhood buzzes with restoration and new openings, as the developers tackle building after colonial building.” Some can’t-miss addresses: Donde José, a chef’s table restaurant that’s one of the most upscale in the city; Fonda La Sexta, a pioneering restaurant that employs low-income women chefs; La Concordia, a new hotel with a great rooftop bar for sunset drinks; and Karavan, a one-stop shop for Panamanian-made gifts. 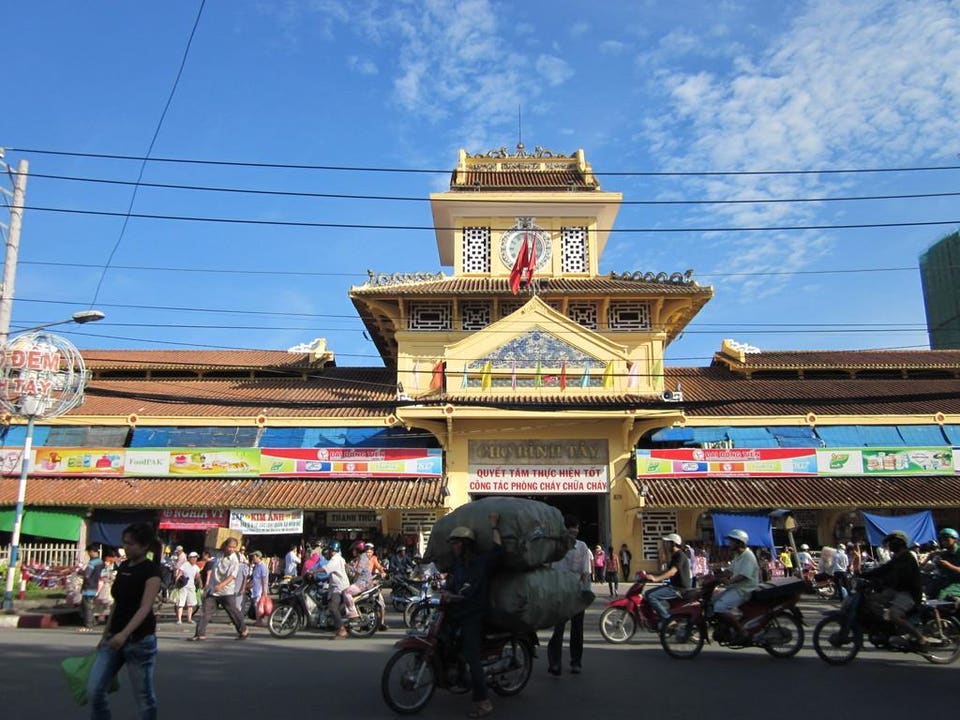 “Most visitors to Saigon spend their time in Districts 1 and 2,” explains Andrea Ross of Wild Frontiers. “However, to get away from the crowds and have a more local experience, we like to head to District 5. Here you’ll find Saigon’s Chinatown, as well as unique temples like Phuoc An Hoi Quan Pagoda, a colorful Taoist temple frequented by locals. The Binh Tay market is a local marvel, selling everything from fresh goods to car radios. At night the streets come alive with bars and restaurants offering live music. It feels like a throwback to old Saigon, and is a fun way to escape the more manicured central districts.” 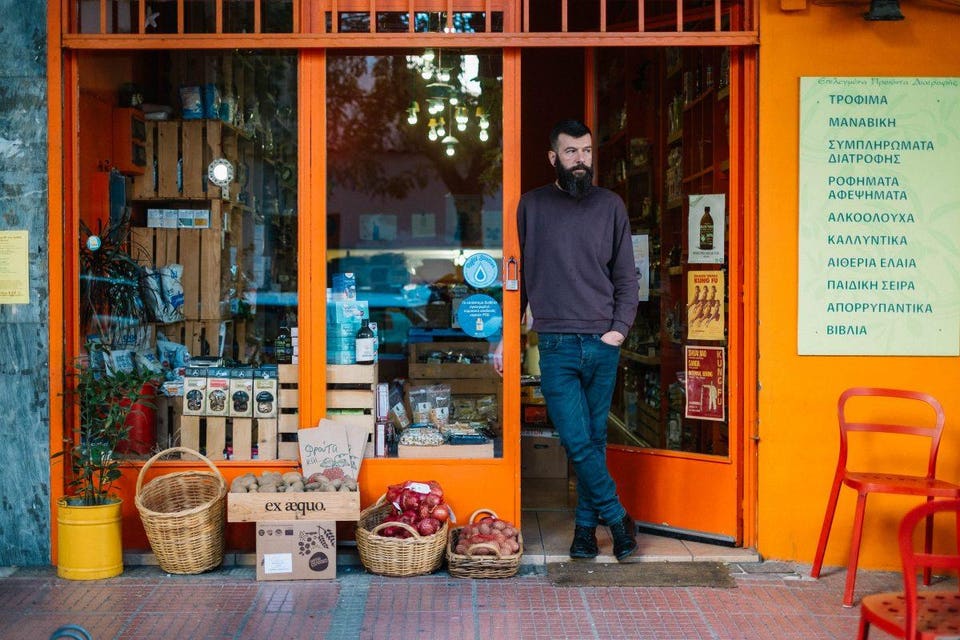 This district is another favorite of Culinary Backstreets. Their Athens correspondent wrote, “Just a ten-minute walk from Athens’ buzzing historic center, the laidback Keramikos neighborhood seems to live in a magical world of its own,” writes their correspondent. “It’s a place where old and new, Greece’s storied past and often turbulent present, tradition and forward-looking creativity all coexist happily together. At the weekly street market, the neighborhood comes alive in a riot of sights, smells and flavors…. In recent years Keramikos’s low rents and old-time feel have lured creative young Athenians to the area, where they have opened inventive restaurants, bars and cafés along with galleries and theaters. Joining Keramikos’s rich trove of existing old-school establishments, these new spots have helped create one of the Athens’ most exciting dining and cultural scenes.” 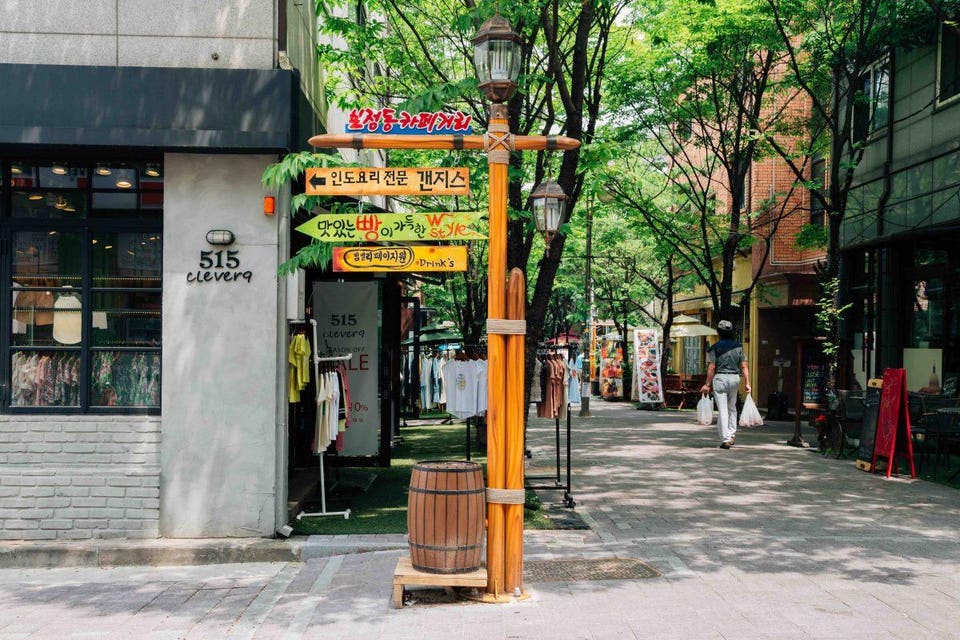 Marchant calls this neighborhood the “Brooklyn of Seoul, a buzzy hive for all things creative. The graffiti-adorned industrial warehouses have been revived as trendy hotspots, appealing to hipsters, photographers and foodies alike. House of Collections, an art group based in Seoul and New York City, has helped Seongsu-dong establish a thriving arts scene.” The most recent exhibition, Blowing Romance in Water Garden, was an Instagram hit. There are also eccentric and sustainability-focused eateries like Daelim Warehouse and Café Onion. 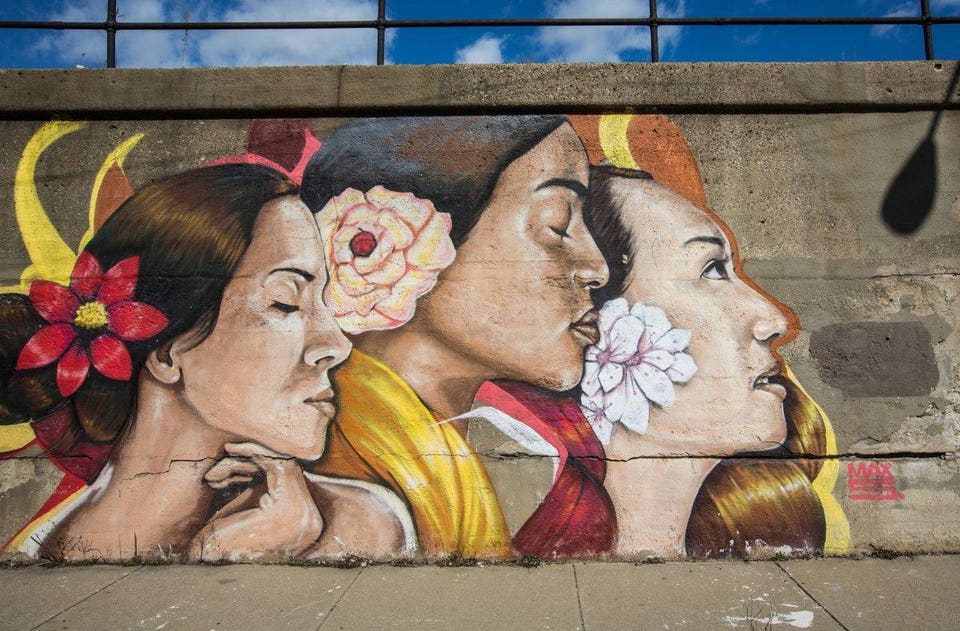 “Featuring streets lined with hip galleries and walls decorated with colorful murals dating from the 1970s, the Pilsen neighborhood on Chicago’s Lower West Side is a nest of cutting-edge culture and art,” says Biggs Bradley. “It’s been fostered by successive waves of Eastern European and Mexican immigrants, in addition to local artists and students, who have molded this fascinating area over the past century and a half. At the National Museum of Mexican Art, the 10,000-piece collection showcases the work of Mexican and Mexican-American artists. And there are a growing number of performance venues, art studios and trendy bars like the popular Punch House. 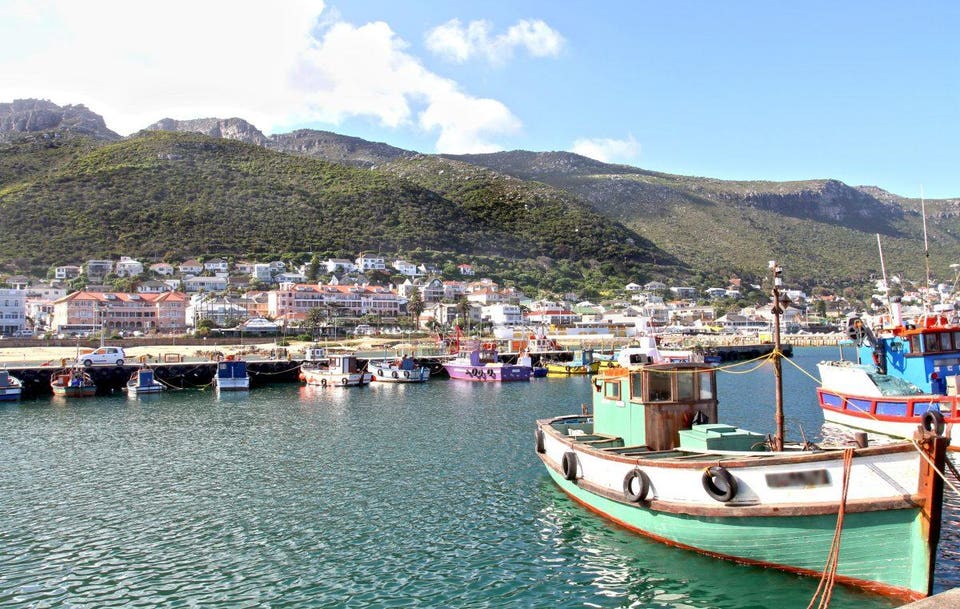 “A seaside haven slightly removed from the bustle of Cape Town, the former fishing village Kalk Bay is attracting more than just the local surfer community” says Marchant. “Blanketed with quaint cafes, rustic fishing boats and colorful storefronts, this vibrant harbor neighborhood is recently the talk of the city. Olympia Café, a standby for locals, is an ideal launching pad for a day of False Bay coastline exploration. An intricate origami installation created by Kalk Bay local Sanae Sawada decorates the walls of the iconic café, which is just steps from the charming seal-invaded wharf.” [Source: Forbes ]