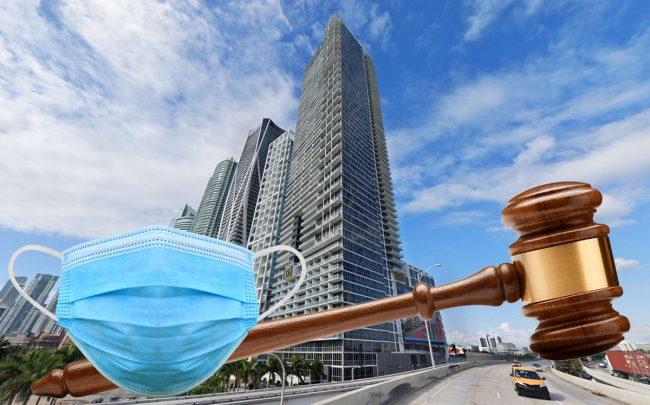 The association considers Abuimweis’ behavior a “nuisance” that could hurt other tenants. “The other residents of the condominium, including those who are elderly or immunocompromised, should be able to use the common elements without Tenant violating local health ordinances,” according to the lawsuit.

Attorneys for the condo association did not return a request for comment, nor did Optibase representatives. Optibase is a publicly traded Israel-based real estate investor with properties and interests in Switzerland, Texas, Philadelphia, Miami and Chicago, according to its website.

Abuimweis said he was not aware of the lawsuit and had to speak with his lawyer.

Abuimweis posts regularly to several social media accounts, where he proclaims himself “The King of Miami Real Estate,” a slogan he has trademarked. He has an Instagram account of 6,000 posts and 26,000 followers, plus a YouTube account with 1,000 subscribers. State records show he has a current but inactive real estate agent’s license that expires at the end of the year.

His videos include information on real estate and self-help advice. In multiple videos and posts, he does not wear a mask while out in public. In some videos, he refers to the global pandemic as a “scamdemic.” Florida does not have a statewide mask rule, but Miami-Dade County and some cities, including Miami, do. Miami imposes a fine of at least $50 for those who refuse to wear a mask in public spaces.

A previous tenant in Abuimweis’ condo also faced eviction. The association accused him of bringing a naked woman through the common areas and allegedly harassing the property manager. That tenant voluntarily moved out last year, according to court filings. That tenant paid $3,750 a month for his unit.

Listings on the Marquis’ website shows condos for sale from $545,000 for a one-bedroom, up to $9.9 million for four bedrooms in 8,000 square feet. Former New England Patriots tight end Rob “Gronk” Gronkowski closed on a condo at Marquis Miami last year for $1.7 million.

The Marquis’ condo association is no stranger to the court system. Last year, it filed a lawsuit for an alleged violation of the building’s ban on daily and weekly rentals.

Management at the Marquis previously told The Real Deal it took steps early on to protect health during the pandemic, including purchasing about 22,000 masks and thousands of bottles of hand sanitizer.

At least one other case of potential eviction over not wearing a face mask has popped up in the U.S., in Montana. The website for the attorney general for Washington, D.C., explicitly states that apartment tenants must wear masks indoors and stay six feet from others who are not in their household. The Hawaii Public Housing Authority passed rules to mandate mask-wearing in the common areas of public housing, with eviction possible after two warnings.

Florida currently has a ban on the final action of residential foreclosures and evictions that lasts through October. The order only applies to residential properties, and it does not cover tenants whose leases expired or any other non-payment that is not attributable to the coronavirus pandemic.

The state faces a deluge of residential evictions and foreclosures once the stay is lifted, similar to the cluttered court dockets seen in the last recession. Judges will likely be overwhelmed with cases, experts say. [Souce: TRD]